Emmi Pikler completed her medical studies in Vienna in the 1920s. In those years, Vienna was the cradle of reformist ideas. After the birth of their first child, she and her husband lived in Trieste for a year, where her husband worked as a mathematics teacher and applied reformist pedagogical principles. They then moved to Hungary in 1932. Emmi Pikler started then her private practice in Budapest, since she could not officially be employed due to her Jewish origins. During the Second World War, she and her family survived, thanks to some of her patients who hid them.

She became well-known in Budapest (Hungary), as an excellent pediatrician in the 1930s. The children she took care of – nearly one hundred families – were less ill, and had hardly a major disease. As a pediatrician, however, she was more interested in promoting healthy physical and psychological development than in preventing or curing illnesses.

Her vision of a healthy infant was an active, competent and peaceful infant, who lives in peace with himself and his environment. She would visit infants and families weekly, discuss with the parents how to promote their development, based on their view of the child and her own observations, and provide guidance to mothers about upbringing practices and how to create an optimal facilitating environment for their infant.

After the Second World War, Budapest was faced with the challenge of caring for many parentless infants. In 1946, Emmi Pikler initiated the creation of a nursery home in Budapest in an abandoned house in Lóczy Lajos street. Since then, the house never closed and became known as Lóczy. Since 1986 it has had the name Pikler Institute.

Nowadays, more and more professionals from around the world, learn and apply the Pikler educational and developmental concepts. I wonder about the origin of this recent growing interest, may be it is driven by the wish of raising a new generation of more peaceful, cheerful and active individuals…

The principles of the Piklerian approach

The most well-known and innovative element of the Pikler approach was the discovery and the exploration of how motor development is facilitated by the infant’s own initiative . During her consultations, Emmi Pikler guided the parents to let their infant’s initiate his/her movements and to determine the pace of his/her motor development, contrarily to the traditional practice : the parent was told not to turn the infant from his back to his belly, until he would do it by himself, not to sit him down until he could sit up by himself, not to hold the infant by the hands in the standing position until he is able to stand up by himself, not to make the infant before he’s ready for it, nor to stimulate any movement in any way. Each milestone of motor development is reached by the infant’s own initiative as a result of his own efforts.

Emmi Pikler would leave out any equipment that would encourage baby’s passivity, such as seats and walkers, revealing the so far hidden abilities of infants: she showed how an infant, driven by his own initiative, is able to be active in continuous movement, to venture to new tasks. Not less important is the impact of these “discoveries” on the parent’s perception of his/her infant, which, in turn, will lead the parent to go on respecting their baby’s need for space and pace, and treat him also with tactful respect. Emmi Pikler described her unique observing position and her own internal image of the Infant in her first book published in 1940, just before the War, which she dedicated to parents. Here are some examples of the 60 photos of her little patients, which she used for illustrating her approach.

Lying on his tummy, he positioned himself softly and comfortably on the wooden platform, which is covered with a flannel blanket, but otherwise hard.

It is often said about children, and, especially, infants that they sleep “soundly”. But it is not always true. Children, what is more, infants, are not all the same in this respect. Many of them are “lulled” to sleep. They need to be rocked, carried around, or be talked to, told tales before sleeping. They only fall asleep when they are so drowsy that they are simply unable to keep their eyes open.

For “nervous”, restless children, falling asleep is a difficult task, and they stir and toss about in their wretched sleep. As if something inside them protest and resist falling asleep, but fatigue is stronger, and overcomes this internal resistance, as the common saying: “He was overcome with sleep.”

This infant here does not look defeated after a struggle. He got a little tired, sleepy and now he is in the process of falling asleep. He surrenders himself to sleep lightly and with pleasure, as it is a familiar and pleasant state of being to him. His eyes have already closed, but his hand is still in his mouth. He no longer suckles on his fingers, they are only forgotten there – they have not fallen out yet. He gave himself up to sleep peacefully and happily, like someone who knows that nothing wrong can happen to him either awake or asleep.

Only those children can fall asleep this way who live in the fullest harmony with themselves as well as their environment.

Bends down from standing 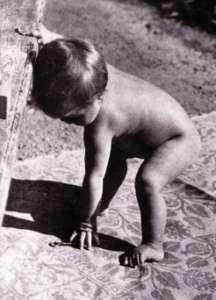 She has bent down from a standing position. She is holding on to something with her right hand, trying to pick up a key from the ground with her left hand. The movement is slow and extremely careful; the child bends down only to the minimum extent that is absolutely necessary. Her equilibrium is not stable as she is supported only with one hand. Her left foot is curved a little: we can see the typical posture: the curved toes seem like they are trying to grab the ground, helping the child to stabilize her equilibrium. The child has ventured to a difficult task, which she can only perform with the utmost care, very cautiously and slowly. Yet we do not see any cramped stiffness in her posture. She is soft and smooth. In her movement there is some calm security besides her carefulness. We are certain that this child is not going to tip over, or even if she falls she is not going to hit herself. Her posture and her moves are soft and not stiff. 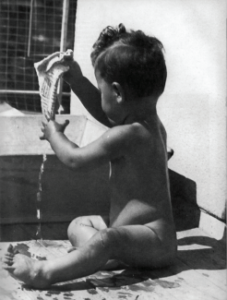 The child sits next the bathtub, observing the drops of water dripping from the cloth. In the sitting position, both of her knees are now in the front, although one of them is still bent.

For this child in this age sitting in this position was the best and the most secure.

The child’s back and trunk is up straight like an arrow. She shows no stiffness, made no effort and is in the most comfortable position for her. Nobody told her to “sit straight!” Such a straight posture cannot be achieved by forcing, teaching, asserting.

This child could already stand, and had just started to walk.

2. The outstanding importance of tactful and respectful care in the relationship of the infant and the adult caring for him is a less well-known yet important element of the Pikler approach. 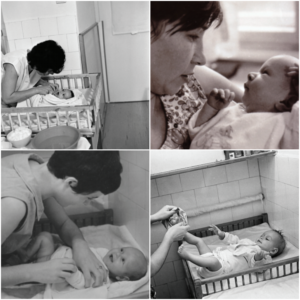 The care situation is the scene of the meeting of two persons. While the mother or the adult caregiver provides the infant’s physical needs, she establishes a direct contact with him. The infant can experience how the adult adjusts to his signals. Discussing in depth the details of caregiving with parents was a major component of Emmi Pikler’s home visits. Then, with the creation of the Nursery Home, she applied the principles to this unique context of parentless babies, by conceptualizing a detailed, concrete “choreography” of “therapeutic care”. She taught the staff how to install from day one of the infant’s life, a respectful dialogue of gesture, speech and attention. She thus created a “culture” of ways to touch, to pick the infant up and to hold him in the arms, how to pay attention to him, and how to respond to his signals. The end result of this approach is the creation of a psychological space, that optimizes the infant’s development, in whatever context he is growing up.

The concepts of recognition, free activity, and quality of care, are not new to us today, but the way Emmi Pikler taught us to apply them in the every day practice, in different concrete situations is still very valuable.

3. Emmi Pikler proved that it is possible to avoid the harm of institutionalization, by putting aside the traditional caregiving practices common in institutions and applying what she had learned from her experiences with normal families. 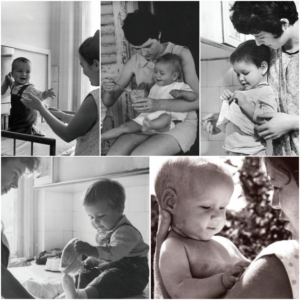 She indeed was successful at creating, within the context of an institution, such a facilitating environment that enabled the infants to grow up into healthy, explorative and active children, with self confidence and trust in adults, and a core sense of belonging to significant others. This result is proven by follow-up studies, and can be learned also from several films. Obviously, this is a much more challenging and complex task than in ordinary homes.

In the Pikler Institute, it became possible to directly observe the children living there, as well as the individual, respectful, affectionate care, and to study the institutional structure enabling all this.

The application of Emmi Pikler’s respectful and affectionate image of the baby, to various contexts of care around the world (day care, institutions, families) approach, has helped babies to develop well, and adults to change their internal representations of the baby’s capacities and their role as care providers.

For further information on the Pikler Institute and the list of publications by Emmi Pikler and her colleagues, please visit www.pikler.hu.