In the Soviet system the health of the infant/child and mother was a priority. However, the emphasis lay heavily on the side of physical health, and much less on the side of emotional health.

On the positive side – during pregnancy mothers had access to prenatal care at least once a month. The expectant mother received paid leave of absence from work 8 weeks prior to delivery, and 8 to 12 weeks post delivery. Beyond that period a mother had the choice to stay off work without pay (12-18 month) and the work place had to guarantee her position when she returned. Pediatricians looked after the infants and children at intervals of 4 weeks or less. The main medical institutions had children’s services attached to them where pediatric sub-specialists were available for children who needed more complex health care. All of this was paid for by the State.

In the Soviet Union pre-school teachers had to have a university level education. Children were encouraged to join group activities where they could choose music or ballet or drama, etc. according to their talent. Sports were very important in schools. In socialist countries all children had equal rights — they were not discriminated by nationality, race, place of birth or financial status. Mother and child protection was provided by many health authorities – women’s consultations, maternity hospitals and maternity wards, hospital children’s wards, milk kitchen, Mother and Child research institutes. Children’s health was promoted in nurseries, kindergartens, boarding schools, extended school days, pioneer camps.

On the negative side – the primary approach to infant and child care was a biological one. There was very little available in terms of psychological education or support. Health issues were looked after in a fragmented way – each sub-specialist attending to a particular problem. There did not exist the notion of a family doctor with whom the patient would develop a mutually trusting relationship and who would guide the patient through the health care system. Newborn infants in the Obstetrical ward were kept separate from their mothers to prevent infections. Parents who had a handicapped child were advised to place the child permanently into children’s homes so that parents could return to their jobs. If a newborn died, the medical staff recommended to have that newborn cremated and disposed of as biological waste. The woman did not receive any psychological help. The doctors advised the parents to “be positive and get on with life”.

Ninetyeight percent of pregnant women were found to have health problems. The true cause of health problems was poverty, malnutrition, inadequate working conditions. After World War II many women were forced to work. At the end of maternity leave (eight weeks), mothers had to return to work, but they were allowed every 3 hours for one hour to breastfeed their child. The infant was fed every three hours. Night-feeding of infants was not recommended. In the post-war years, this stance was perhaps also justified: “Do not forget to feed the baby every three hours! Accustom the child to sleep at night, because tomorrow you will have a hard day of work! “. Productivity was put ahead of the individual’s wellbeing. Later this recommendation became law – not to breast feed their hungry, crying children up to 15 minutes prior to feeding time.

During the Soviet regime there was a significant difference between the official ideology of the State and between the real life situations. Even though the principle of equality was the proclaimed standard, in truth there was no respect for the individual, and human rights were minimal. Man was of value only if he was of direct benefit to the Communist state. For example, sports schools, which were publicly funded, could admit only prospective athletes who could compete and demonstrate socialism’s superiority over capitalism. For others the opportunity to be part of professional sports schools was denied.

Initially in the Communist era the official position was the promotion of State-run Daycares as the preferential way of looking after infants and children. Insufficient knowledge about the child’s normal development lead to unfounded requirements for the child and parents:

– A 12 months old child should be able to use the toilet. If the child is unable to control his eliminations, he is denied entrance to kindergarden.

–   In the period of emerging sexuality when the child explores his body and examines gender differences, touching his/her genitals was considered as onanismus – sexual perversion (formal psychiatric diagnosis!) .

– Stranger situations with separation anxiety and rapprochement phase with temper-tantrums was seen as a sign of poor parenting of the child.

Soviet times were characterized by a distancing and weakening of the parent – child relationship. Early utilization of child care centers – at already 7 months of age was a common phenomenon. It was common in rural areas to keep the child in day care all week long (24 hour care). Now the pupils of 1970-1980 kindergardens are 30-40 years old. They complaint about a sense of emptiness, anxiety and depression. They have attachment disturbances. Many of them are childless/ childfree, living alone and unable to establish stable relationships with partners. They also have alienated relationships with their parents. However, there are fortunately also exceptions.

Vignettes of life in the Soviet times

A mother tells about her daughter’s kindergarden experience: She would take seven 2-year-old children (from her area of residence) and put them in an old army jeep and bring them 30 km to a week-long day care. Chidren spent six days there. Again, there was no understanding of the importance of the parent-child relationship.

Someone needing a general health check-up ( e.g. pre-camp, annual, etc.) would have to go to three or four sub-specialists, each one checking their own narrow area.

Doctors had insufficient knowledge. Not only the lack of knowledge in psychology, but also in the field of modern medicine. Treatment often consisted of shaman rituals – folk healing items, herbal teas etc. Research institutes in the Soviet Union accounted for 10% of medical institutions, but spent 90% of the health budget. However, these institutions worked mainly for the army. These military type of approaches then became recommendations for medical institutions throughout the USSR. I found the following example in a book by J. P. Solsky. “Practical obstetrics” , Kiev, 1977. The author describes         “Training of Psycho-prophylaxis” as a method of analgesia during delivery. Here is the described method of making childbirth painless. The physician is instructed that he must work with a pregnant women during the 3rd trimester.

During the Soviet times courses in psychology or mental health were hard to find. There was no scientific literature available from the West. After the collapse of the Soviet Union this type of information was enthusiastically embraced. Psychological teaching then became incorporated into Medical Schools and Teachers Colleges. In Latvia the Faculty of Psychology was founded in 1991. In the last two decades Infant & Child Psychology has blossomed in university settings. There was enough keen interest in the different disciplines to found the Latvian WAIMH Affiliate. It now organizes conferences and work-shops. Nowadays Latvian colleagues have a chance to attend international conferences and establish new contacts. There is also a great public interest in this area, as well as much more awareness of the infant’s and mother’s psychological needs among young parents. Mothers are able to take a leave of absence from their work of up to 3 years.

Over the past 20 years there has been a genuine hunger to catch up to the Western world. However, this also has its difficulties, because the “professional food” that arrived from the West was often confusing in its variety, and also the “quick ingestion” of this “parachuted professional food” did not have a chance to go through the necessary slow metabolic process.

This method was widely used throughout the USSR and was recommended to be used in the Eastern Bloc countries.

If a woman had pain during childbirth the diagnosis was that there was either, a./ an incorrect history taking;   b./ the psycho-prophilaxis had not been carried out properly; or c./ the consultant had inadequate training in the Pavlovian doctrine. 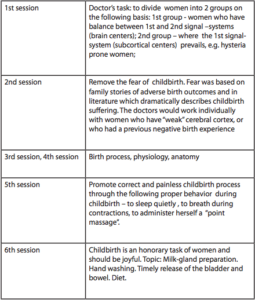 The above text was presented as a lecture at the 12th Congress of WAIMH in Leipzig June 30 – July 3 2010: Overview of the infant and child care system under communism – Its positive and negative aspects. Blaua Z. (WAIMH – Latvia, Latvia).