One of the side benefits of attending the congresses of the World Association for Infant Mental Health (WAIMH) is the opportunity to discover new countries, be exposed to new cultures, and visit places that would probably not be my top priority as a tourist or vacation destination. 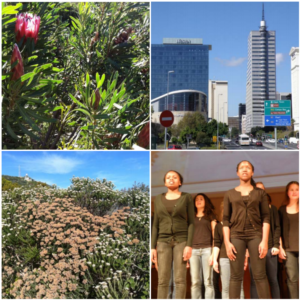 South Africa is truly a beautiful country—with infinite vista, spectacular views, exotic fauna, rich flora, and breathtaking sunsets. At the same time, however, it is also a world of huge contrasts and disparities. Take, for example, the black shantytowns (“townships”) that stretch for kilometers on the outskirts of the cities. It is difficult to imagine how human beings can live and survive in such conditions; the luxurious and well-tended villas surrounded by electric walls and gates; the tense atmosphere and repressed violence in Johannesburg; and the sights that are hard to get out of your mind: young women sitting with babies in their arms at intersections on the outskirts of the city, as if waiting for something—perhaps some ray of hope; or barefooted children, who leach onto you, begging for a few coins to buy food.

Even Cape Town, considered a safe and quiet city, does not inspire a relaxed atmosphere as soon as night comes. It is true that the city is situated on a marvelous bay, surrounded by wooded mountains; Table Mountain rises majestically above it and offers a magnificent view of the city from its summit; it has one of the world’s most beautiful botanical gardens; and the port area, which has been impressively restored, features exclusive stores and numerous coffee houses. Yet all this could not dim the slight feeling of discomfort and fear while walking in the streets in the evening.

The Thirteenth Congress of the World Association for Infant Mental Health took place at Cape Town’s very modern and impressive Congress Centre, located in the heart of the city’s commercial district. A special atmosphere characterized the congress’s opening session – the excitement, typical of the opening of any congress, was accompanied by a sense of expectation for something more, something else, a different experience. …

During the evening, I met warm, smiling people, easy to connect with. The organization was superb and the excellent and plentiful food enhanced the pleasant and special atmosphere.

The congress was truly fascinating and professionally enriching. We were exposed to the findings of cutting-edge research and listened to interesting lectures about infant mental health all over the world. The congress also succeeded in connecting us emotionally to the heart of the Dark Continent and provided a deep perspective on the human tragedy taking place there. Through exciting lectures we heard about the misery of hundreds of thousands of infants and mothers. The local lecturers succeeded in imparting the moving experience of Cry, the Beloved Country. 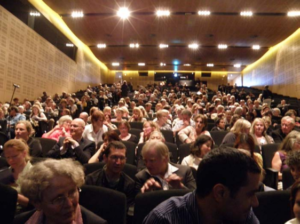 As usual in conferences of this nature, the five days of the congress included dozens of theoretical and clinical lectures as well as diverse panels. However, it was the three lectures at the opening session that made the deepest impression on me.

The first talk, “From South Africa with Love and Forgiveness: Journey through Violence and Back,” was given by Pumla Gobodo-Madikizela, a professor of psychology at the University of Cape Town. An impressive black woman, she served on the Truth and Reconciliation Commissions, set up in South Africa in 1995, the year after Apartheid was dismantled. Their role was to research, document, and denounce the injustices perpetrated by the former regime, as well as the acts of terrorism by the black organizations that fought against the regime. The goal was to compensate and rehabilitate those injured during the Apartheid era, on both sides. The commissions endeavored to let victims tell their stories and help those who committed crimes admit their guilt, with amnesty for those who confessed fully.

In her lecture, Pumla Gobodo described deeply moving therapy groups involving a confrontation between victims – black women who had undergone major trauma, whether personally or by the loss of loved ones – and white officials of the Apartheid regime who had abused and harmed them or their family members. She tracked the unconscious processes that enable the formation of an empathic bond between victim and aggressor and can lead to forgiveness and understanding of the remorse. 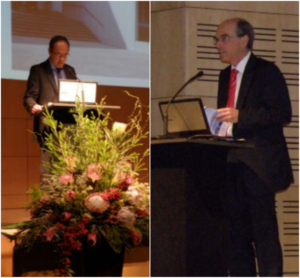 The second lecture was very different. Dr. Olayinka Omigbodun of Nigeria, president of the International Association for Child and Adolescent Psychiatry and Allied Professions (ICAPAP), ascended the podium wearing colorful traditional dress and delivered her lecture in a confident and loud voice, almost shouting, rather like a preacher in the public square. Her lecture was entitled, “Reducing the Burden of Infant Health Problems in Africa: Our Collective Responsibility!”

She presented harsh data on child mortality and mental health in Africa as a whole and in South Africa in particular. Some of these data are well known; others are new. However, the direct and cutting way in which she presented them made it impossible to repress or ignore them. For instance, Africa has the highest child mortality rate in the world. Unlike other Third World countries, South Africa has not been successful in decreasing the infant mortality rate: 20% of live-born infants die before age of five; 30% are born with defects, complications, or some sort of developmental problems; 20%–45% of pregnant women suffer some form of emotional problems; and only half of all infants are breast-fed.

Omigbodun also presented data about the condition of women in Africa and the stress they are living in. Many mothers are teenagers; in Nigeria, for instance, half of the girls are married by the age of ten (!); a very large percentage of mothers and their babies are abandoned by the fathers immediately after birth. Separation, divorce, and single motherhood – all of these are unacceptable in African society; women who have been abandoned by their men are considered to be prostitutes and are humiliated and looked down upon by society and their families. Children who do have fathers generally have no connection with them until the age of 10 to 12. If we add to this the malnutrition, the horrifying living conditions, the absence of medical checkups during pregnancy, the lack of supervision of delivery conditions, and the prevalence of polygamy – we can only begin to imagine what it means to be an infant in Africa. 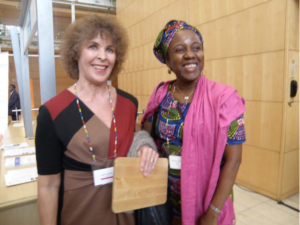 Another astounding fact: in all of the vast country of Nigeria, there is not a single infant mental health center!

Summing up, Olayinka Omigbodun called for enlisting in the cause and taking responsibility for infant mental health. She spoke about the great challenges involved: teaching and training parents, endeavoring to decrease risk factors; being more sensitive to infants’ psychological and social needs; training and raising professional staff; and building health and education programs.

The opening session ended with a lecture by Marc Tomlinson, head of the psychology department at Stellenbosch University in South Africa. In his lecture, “One Hundred Fifty-Five Million Infants and Children in Search of an Evidence Base: Thoughts towards an African Research Agenda,” Tomlinson surveyed three studies conducted in South Africa: one of them on Attachment, another on the characteristics of the mother-infant bond, and a third about postpartum depression (whose prevalence is 35%–41%!). Since the medical, professional, and research staffs in the field are scarce and it is difficult to reach remote and isolated locations, in order to perform professional and clinical work, Tomlinson and his team enlisted women from within the target communities and trained them to serve as liaisons with the local mothers. In addition, he spoke about building infrastructures for developing models for therapeutic intervention for young children in Cape Town’s disadvantaged neighborhoods. 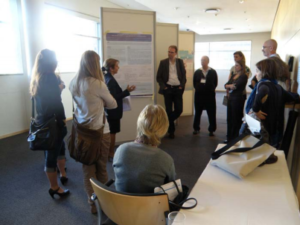 I have no doubt that such an enriching, fascinating, and emotionally charged opening session could have taken place anywhere else. Everyone in the auditorium felt powerfully connected to the fact that he or she was in South Africa, and to the stirring encounter with the complexity, contrasts, and enormous social, economic, cultural, and human disparities that exist between the Western society of abundance and the poverty of the African Continent.

During the congress, it was difficult to choose from the rich variety of theoretical lectures, clinical presentations, symposia, and panels. Many of them were about cross-cultural influences and post-traumatic reactions to extreme stress situation. One of the most important insights that I took away from the congress has to do with multiculturalism, an issue that is very familiar to us in Israel: that is, that when the therapist and the patient come from different cultural backgrounds, the gap may be large and impede communication. In this context, we heard about clinical interventions with the First Nations in northern Canada, with tsunami survivors in remote areas of Indonesia, and with black communities in Harlem, New York.

The common denominator of all of the clinical presentations, despite the unique features of each, was the sensitive approach to a different culture. We heard about willingness to learn about and become familiar with the unique lifestyle of local residents; about attempts by the therapeutic staff to adapt to the other’s norms and about the importance of doing the encounter in the patients’ natural surroundings; and that no unfamiliar and foreign language, mode of behavior, criteria, or standards should be imposed on them. This humane professional approach certainly provides a lot of thought with regard to the work we do here in Israel.

In the same context, from the lecture by Prof. Astrid Berg, one of the main pioneers of Infant Mental Health in South Africa, on mother-infant psychotherapy in South Africa, I learned that in order to make contact with a mother in a foreign language, it is not enough to have an interpreter to translate the words; rather, there is a need for a genuine cultural mediator who is present for the entire course of therapy and who understands the mother’s mentality, is familiar with her lifestyle, and can help the therapists deal with their own fear of the unfamiliar, the unknown, and the unexpected, so that they can be more attentive to the other – the patient – in their meeting.

At the congress, we also heard about clinical projects taking place in various areas in South Africa, where the therapeutic staff goes into the townships and, against all odds, attempts to connect with the population, detect depressed mothers, and provide support and guidance. It was touching to hear that sometimes the staff brings pots of food as a way to get in touch and connect with the hungry mothers. 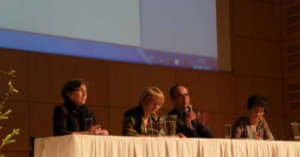 Nearly two months have passed since my return to Israel and I am still preoccupied with the issues related to the extent of responsibility that the Western World bears towards the mothers, fathers, and infants in Africa.

I also ponder the question how we can contribute even if only a little bit, to the sad situation that exists in the area so close to our hearts – Infant Mental Health, in a country that touched us so deeply.

Africa’s cry truly did penetrate deep into my heart!

Return from South-Africa – A personal view on my experiences in the Dark Continent. Impressions of the WAIMH Congress, Cape Town, April 2012.